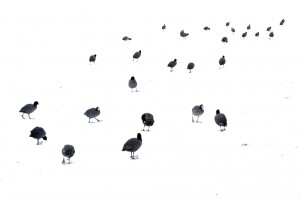 The winter at the start of 2010 was one of the first strong ones in years again in The Netherlands. The lake in the local park in Eindhoven where I live was almost completely frozen. It just had snowed. Perfect conditions to photograph these black Coots in contrast with the white snow. I’d observed the Coots for a couple of days already. I’d shot a whole series of photos. All of a sudden I saw the scene I was looking for. They formed a group and started to walk back to the hole in the ice to go back in the water. While they where walking the scene reminded me of the documentary film “March of the Penguins”.
Equipment: Nikon D700; Nikkor 70-200 AF-S VR 2.8 type II, ISO800, F8.0; 1/60sec.; handheld.